Born in 1960, chartered attorney since 1991. As Rechtsanwalt (attorney-at-law) he is a member of the chamber of attorneys at Munich Oberlandesgericht (appellate court).

He studied German law and politics at the universities of Tübingen, Geneva and Bonn, as well as French trade and commercial law at Paris University (Panthéon-Sorbonne). He is a graduate of the international faculty for comparative law in Strasbourg and has held the position of national correspondent at the British Institute of International and Comparative Law in London.

He undertook his legal training, inter alia, with the international board of arbitration at the federal chamber for economy in Vienna, and in the division of franchise counselling at Ernst & Young in London.

In addition, he is co-editor of the special edition "Publicité" (advertising) of the Gazette du Palais, one of France's most important legal journals.

His main areas of specialisation are: Franchising and the law of marketing and sales, the protection of industrial property, the laws of competition and of intellectual property as well as copyright, company law, and arbitration.

Memberships: GRUR German association for the protection of industrial property and the law of intellectual property and copyright, DFV German Franchise Union, DID German Institution for Arbitration. 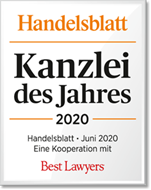